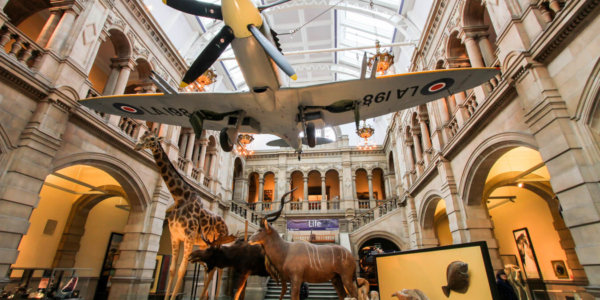 Planned some time between meetings? Glasgow’s rich mix of museums and art galleries is easy to find and free to explore. There are more than 20 in total, and each one offers something different.

Glasgow’s flagship museum. Built in 1901, Kelvingrove was refurbished and expanded in 2006. Housed in a beautiful red sandstone building that alone is worth the trip, the museum offers twenty-two themed galleries.

Here, among more than 8,000 exhibits, you’ll discover an eclectic mix: Ancient Egyptian artefacts, dinosaurs, arms and armour, natural history. Look up from the cases and you’ll catch sight of a Spitfire. Suspended from the ceiling, it seems frozen in the sky. Climb to the elegant galleries for an expansive art collection that boasts, most famously, Salvador Dali’s Christ of St John on the Cross – snapped up by the city for £8,200 in the early 1950s. Below deck you’ll find temporary exhibitions, for which a modest entrance fee is charged.

As you’re close by: cross the road and take a peek inside the Kelvin Hall. Once the site of Glasgow’s Museum of Transport, the building now houses a state-of-the-art fitness facility. A  Heritage Arcade recounting the Hall’s lively past (carnivals, boxing matches, pop concerts) is free to visit and well worth a look.

Well-named, the People’s Palace recounts Glasgow’s story via exhibits and displays that connect with and celebrate people’s ordinary lives and experiences.

Here, social history is front and centre, so this is the place for authentically personal snapshots of days past: one-room tenement life, steamies (public launderettes), adored holidays doon the watter (down the coast) to nearby resorts like Millport, Dunoon and Rothesay. Widening Glasgow’s tale, you’ll also find out about the importance to the city of its Tobacco Lords, and its connections with trades unions (memorably demonstrated via a fine collection of vintage banners). Head to the rear of the museum for a stroll in the Winter Gardens, a stunning glasshouse crammed with exotic and tropical plants.

As you’re close by: the Palace is set in Glasgow Green, the city’s oldest public space and a nice place for a stroll. You’re near the River Clyde too, and can walk along the banks.

A medieval building (one of just four that survive in the city), this small-but-fascinating attraction is the oldest house in Glasgow.

Inside, period room settings are furnished with 17th century pieces courtesy of Sir William Burrell, a celebrated philanthropist and son of Glasgow. Here, you’ll also find royal portraits and, to the back of the house, a pleasant medicinal herb garden.

Worth knowing: the sprawling 9,000-exhibit Burrell Collection, bequeathed to the city by Sir William, is undergoing a significant overhaul. Closed until 2020, Kelvingrove is hosting a changing display of Collection treasures throughout the refurbishment.

As you’re close by: pop into the St Mungo Museum of Religious Life and Art. You’re also very near the beautiful Glasgow Cathedral – neighbour to Glasgow Necropolis, a magnificent Victorian cemetery.

If you’re located in the very heart of the city, good news: so is GoMA, Glasgow’s modern-art oasis.

Sited in what was, variously, the home of a Tobacco Lord, a bank and a library, the gallery presents a revolving programme of temporary exhibitions. Exhibits have included works by big-hitters like Beryl Cooke, David Hockney and Andy Warhol. A true cultural hub, GoMA’s mission is to share ideas and, through modern art, to inspire people and communities. And in a case of the past revisiting the present, GoMA now shares its space with the city centre library – something that ties in perfectly with the values underpinning the gallery.

As you’re close by: don’t miss a real Glasgow landmark. Opposite the gallery’s entrance you’ll discover a statue of the Duke of Wellington. The Duke is seated upon his horse. And seated upon the Duke, most probably, will be a traffic cone. This prank has, albeit unofficially, become a city motif, featuring on t-shirts, postcards and even serving as inspiration for an ad campaign.

The question remains though: just how do those regularly-removed cones end up back on Wellington’s head?

Venture just a little way along the Clyde and you’ll be rewarded with one of Glasgow’s newer museums. Opened in 2011, the architecturally-bold Riverside offers an assortment of collections largely themed around transport.

European Museum of the Year 2013, the Riverside is one of Glasgow’s more interactive attractions. Here, it’s possible to get hands-on with many exhibits, so if you’ve ever wanted to step on the footplate of a locomotive, this is the place for you. From a pram to a rocket, a skateboard to a tram, the Riverside tells a multitude of stories across its 3,000-plus exhibits. Of course, the history of Glasgow’s world-class shipbuilding industry looms large, and on three highly detailed vintage street displays, it’s possible to turn the clock back from this quieter, ultra-modern Clydeside to one that once buzzed and clanked with industry.

As you’re close by: the Tall Ship – the SV Glenlee – is moored opposite the museum. Built in 1896, she now welcomes visitors aboard for an exploratory voyage across her decks.