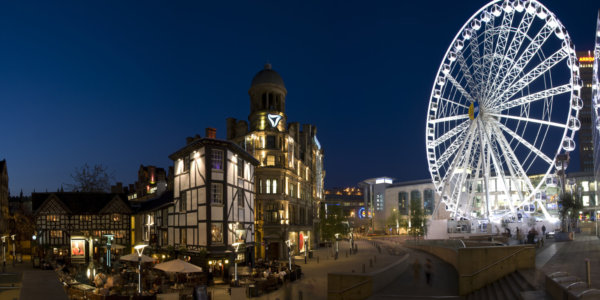 This Manchester. This Summer.

A sprawling festival, cracking cocktail bars and a full mile of curry houses. Manchester, an authentic social and cultural powerhouse, demands a visit.

Descending on the city every two years, the Manchester International Festival (MIF), opens on June 29 for 18 breathless days.

Focused predominantly on original new work, ‘eclectic’ is one small word you could use to describe the event’s big mix of comedy, dance, film, food, music, theatre and more.

Just as varied are the venues staging over 60 events. Across Manchester, as well as the galleries, theatres and halls you’d expect to be visiting, MIF will urge you to concerts and dance performances, plays and talks in railway depots, churches – even car parks. It all adds up to a festival with pride, people – and the entire city – firmly at its heart.

When MIF kicks off, it will spark into life via an epic buzzing opening party. It’s located, appropriately, bang in the centre of Festival Square (Albert Square’s festival-time alter-ego). Ticketholders can expect DJs, dancers, and a catwalk dance-off. Not one for the shy and retiring, then.

The square will remain the place to be throughout the festival. Acting as the event’s official HQ, head here for food and drink – courtesy of pop-up bars and eateries – live music and DJing.

The BBC will be based here too, broadcasting highlights across the country. And it’s all happening against a backdrop created by students of Manchester Metropolitan University’s School of Art. Led by two of the UK’s hottest young designers, Paloma Gormley and Nicolas Henninger, bar frontages, furniture, floor designs – even light fittings – have all been specially designed for MIF 2017.

One must-see? Music-wise, New Order are playing a series of intimate shows at the old Granada television studios. It’s the very place where Joy Division – whose surviving members went on to form New Order – received their first TV exposure. The Manchester band will be joined by a synthesiser ensemble, and will be performing on a set created by visual artist Liam Gillick.

Factory will be a groundbreaking new venue driven by the creative vision and breadth of Manchester’s cultural life. It will form part of the new St. John’s neighbourhood, which is being developed by Allied London, in partnership with Manchester City Council, on the site of the former Granada TV Studios. #arts #culture #manchester

Manchester’s making quite a name for itself on the cocktail circuit. Whether you’re in the city for the festival or not, here’s five spots to get all shaken and stirred about.

Located inside the magnificent Midland Hotel, Mr Cooper’s – named after a wealthy 19th-century coach-maker – prides itself on its use of exotic ingredients – including lemon dust and toasted oats – and equally exotic equipment. This includes a Rotary Evaporator. Don’t worry about what it’s for, but if you want to sound hip refer to it, casually, as a ‘rotovap’.

It’s the last day of #RHSChelsea Flower Show, but what do you think to our inspired entrance? Should it stay or should it go? #flowers #welcome #mrcoopers #houseandgarden #manchester #restaurant

Concentrating on quality and creativity, you won’t find many of the cocktails on Liquorice’s menu being served up anywhere else. Traditionalists can, of course, ask for the conventional – a Manhattan, maybe, or a Cosmopolitan – but it’d be a shame not to take a chance on the House Concoctions like the Cantaloupy or Watermelon Cooler.

What a view. Sitting pretty on the 23rd floor of the ultra-central Beetham Tower, style is front and centre at Cloud 23. Here you can watch the metropolis buzz through floor-to-ceiling windows as you sip on Champagne or enjoy a signature cocktail. These include city-celebrators like Bittersweet Symphony or the Coronation Street-inspired Ena Sparkles.

If you’re fortunate, your trip to Manchester will be bathed in golden sunshine. But even if the summer turns out to be of the British variety, you can still catch some heat on Manchester’s legendary Curry Mile.

The city has had a love affair with the hot stuff since the 1950s. That’s when curry houses began springing up to serve, initially, the large number of mill workers beginning new lives in Manchester. As we know, the cuisine – in all its regional guises – soon caught on big time with everyone else too.

Located a couple of miles south of the city centre, on Wilmslow Road, the Curry Mile is well worth your short commute. And summer’s one of the best times to visit. Why? Because on evenings when the sun’s beginning to sink, you can’t beat a pre-dinner stroll alongside the more than 70 restaurants – and 30 or so takeaways – before finally choosing one to pop into.

If you can, plan a late-evening visit. Here, you see, neon is the order of the night. And photo opportunities abound. Those bright lights, European-style late opening hours and the pungent, spicy aroma of a thousand dishes all combine to make this a unique destination – and a triumphant end to the day.

after a long and hard 21 years, we decided we needed a face-lift!

To find out what people are saying about Manchester’s Curry Mile restaurants, why not check out reviews on Zomato here

Has MIF 2017 made Manchester unmissable for you? Or maybe you’re looking to visit one of the UK’s most genuinely vibrant cities outwith the festival.

Whatever your reason – be it business or pleasure – rely on a Dreamhouse apartment for a home-away-from-home.

Our Manchester apartments are offered at two convenient city-centre locations. Check them out here