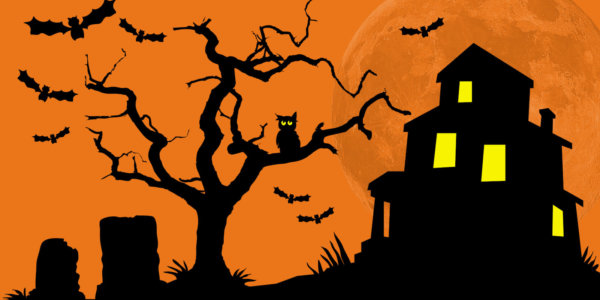 Ready for the darker nights? We’ve put out the welcome mat for films with haunted houses at their heart.

With the leaves falling fast, and a subtle chill in the air, the perfect time of year to unsettle down with a scary film is here.

So to mark Halloween – and the darkening evenings beyond – we’re creaking open the doors of six fear-filled films, each one with a haunted house at its heart.

Our fictional frights are just the thing for a spot of escapism. But how about we throw in some haunts alleged to be the real thing? You’ll discover a handful of true-life haunted homes if you’re brave enough to check out the basement at the bottom of this blog.

But whatever you do: don’t forget to leave a light on.

Tobe Hooper’s hugely successful chiller located the frights squarely inside the familiar middle-class North American home. No malevolent mansions or crumbling castles here. And maybe it was this ordinary  setting that rung a bell with audiences. By bewitching everyday objects – a TV set, a doll, a backyard tree – the scares were, literally, brought closer to home and, arguably, closer to our imagination.

Much of the action in Poltergeist is plain silly and way overcooked, but that deliberately commonplace location gives it every right to occupy any haunted-house film list. Educational too, the overarching lesson Poltergeist teaches us is this: don’t build housing developments on cemeteries and then try and cover it all up later.

All work and no play makes Jack a dull boy…

Set not in a house this time, but in rural Colorado’s empty-for-the-winter Overlook Hotel. There, Nicholson’s would-be writer, Jack Torrance, accepts an out-of-season caretaking job – around which he hopes to complete a novel.

With his wife Wendy in tow, and their young song Danny – possessed of ‘the shining’ (revealed as the name given to the boy’s telepathic ability) – the stage is set for the apparitions, outbursts and time-slips that will characterise Jack’s gradual descent into madness: a shift connected with the hotel’s past.

Although it’s known that King is largely unimpressed with Kubrick’s interpretation (he felt the supernatural elements of his novel had been downplayed), for the rest of us here is a genuinely terrifying and intelligent film whose horror exploits its location: elevator doors, long, mind-bending corridors, the cursed room 273.

The Shining’s scares are terrifically realised and amid the more famous axe scenes, or those haemophilic elevators, the most disturbing thing in the entire film may well be – and here is your spoiler alert – the late reveal that Jack, rather than writing his novel, has actually been typing, thousands of times, the phrase ‘All work and no play makes Jack a dull boy’. Brrrrr…

What happens when you sleep?

Bedroom cameras, set up by the couple themselves, capture both the subtle (flickering lights, vibrations) and, later in the film, the sensational (an animating, combusting Ouija board).

Shot in a week, and on a shoestring, Paranormal Activity’s shocks rely largely on suggestion, not special effects. A scene in which Katie simply stands silently over the sleeping Micah – shown in super-fast-forward to reveal the act’s two-hour duration – is spookier than anything a big SFX budget could conjure up.

And speaking of budgets, garnering a frightening $193m from a timid $15,000 spend, profitable activity was the order of the day: the film is mooted as the most money-spinning ever made.

This Edwardian-set tale, from Susan Hill’s popular novel, is crammed with old-fashioned shocks and a tangibly menacing atmosphere throughout.

The dark star of the show is Eel Marsh House – a built-to-be-haunted estate accessible only via a causeway that crosses the deadly surrounding marshes.

Into this already-promising situation enters, unwisely, Daniel Radcliffe’s Arthur Kipps. He’s a recently widowed young lawyer, and here he is tasked with preparing the sale of the empty mansion.

Cue all manner of scares, including old reliables like self-rocking chairs and self-winding clockwork toys.

As Kipps learns the backstory of the vengeful titular phantom, he goes about laying her spirit to rest. But in a film jam-packed with chilling imagery, it’s the silent, sullen Eel Marsh House that will remain in the memory.

During afternoon tea,
There’s a shift in the air
A bone-trembling chill
That tells us she’s there.
There are those who believe
the whole town is cursed
But the house on the marsh
Is by far the worst.
What she wants is unknown
But she always comes back
The spectre of darkness:
The Woman in Black.

Sooner or later, they will find you

Set in a mansion on the Channel Islands (geographical isolation seems to be a theme with these films), The Others is an elegant psychological horror.

Fearing her WW2 soldier husband has been killed in action, Nicole Kidman’s tense, buttoned-up Grace spends her days home-schooling her photosensitive son and daughter. Across the film she obsessively ensures they stay out of what little light the remote, gloomy location affords them.

When a peculiar trio of work-seeking servants present themselves at the house, strangeness occurs: with no one near it, a piano plays. In an empty room filled with sheet-covered mannequins, footsteps are heard. And when a Victorian book of the dead – essentially a family album with the novel twist that each subject is photographed post-mortem – is unearthed, it does nothing to lessen the overall feeling that something odd is afoot.

Are the servants responsible? Is Grace imagining it all? And what of this husband?

For a Halloween double-bill, Pedro Almodovar’s The Others is an ideal companion to The Woman in Black.

We end our viewing appointments with a bit of light relief. Or relief as light as Tim Burton will allow.

Swerving on the road, newly-weds Barbara and Adam quickly wind up as newly-deads. But they don’t know that until, on returning to their Connecticut home, they discover the Handbook For The Recently Deceased has been left for their attention.

Now aware of their fun new circumstances they must endure the Deetz family moving into their dream home – and transforming it into a pastel-hued nightmare.

After failing to scare the ghastly Deetz clan from the property, Michael Keaton’s Beetlegeuse – a freelance bio-exorcist – is summoned, and with the help of the Deetz’s willing daughter, Lydia (an ace Winona Ryder), the horrific laughs begin.

Beetlejuice is great fun, rammed with effects that are eye-popping even today, and presents a bureaucratic vision of the afterlife that’s a hoot too.

Marianne, please help me get out…

The sensational ‘most haunted house in England’ was built in 1862, and sited in Borley, a village on the Essex/Suffolk border.

The rectory certainly looked the part, and tales of a ghostly nun, of footsteps and of a scrawled message – Marianne, please help me get out – literally ghost-written on a wall, and directed at a resident, were lapped up by newspaper readers.

The alleged phenomena persisted into the 1930s, attracting the attention of celebrated ghost hunter Harry Price. His investigations, begun in 1937, reignited public interest in the case, although his assertion that the rectory was indeed haunted has been largely discredited.

Today, ghost enthusiasts continue visiting Borley, despite the fact the rectory, almost inevitably, was destroyed in a mysterious fire in 1939.

In December 1975 the Lutz family relocated to Amityville, a coastal village in Suffolk County, New York state. After just 28 days they ran from the foreboding Dutch-Colonial style mansion – and straight into the welcoming arms of the media.

Were the Lutz’s tales of strange sounds and smells, of unseasonal fly infestations and a demonic creature just a lucrative publicity stunt? The debate will not die – a bit like the current roll-call of 13 (thirteen) sequels to the famous 1979 film The Amityville Horror (and even that was remade in 2005).

The house, on Ocean Avenue, was on the market recently, (and viewable on the estate agent’s website). Across the years subsequent owners, however, have reported zero bumps in the night. Spoilsports.

In existence are several stories about how ‘the most haunted house in London’ came to hold that title.

Take your pick: is it the spirit of Adeline, a young woman who leapt from an upstairs window to flee her wicked uncle? Or is it the ghost of an insane young man, imprisoned in the attic and fed through a hole in the wall by his brother? Could it be the restless soul of a young girl, murdered – in that attic again – by a servant?

Whatever the origin, from the early 1800s, reports of weird goings-on began circulating around the capital: a brown mist; a strange white figure; doors slamming; foul odours.

Across the century an eclectic list of unfortunates occupied the address. From Prime Minister George Canning to nobleman Lord Lyttelton, from shore-leave sailors to the townhouse’s maid (who could only repeat the phrase Don’t let it touch me! on the way to the asylum) – all had their own run-ins with whatever resided at that well-to-do location. Resided? Or resides? Long-term occupiers, the antiquarian book dealers Maggs Bros, left the property in 2015. And since then, reports of new phenomena have arisen…

Today, an ancient police notice forbidding the upper floors to be used for any purpose whatsoever remains on the wall.

And its command remains in force.

Helpful advice for the avoidance/handling of haunted houses:

Quite enough nightmares for one blog? Relax – and choose Dreamhouse for your next home-from-home.

Complete with everything you need to work and play, and with a focus on comfort and location, our properties are just the thing for your next business or leisure trip.

Discover our range of fantastic apartments in Edinburgh, Glasgow, London and Manchester- and check availability and rates – all on our website